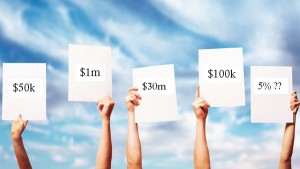 We’ve been dead wrong in our calculations of gift potential for major donors.

We don’t have the right information. And we’re using what we do have the wrong way.

Let me set the stage: normally when we’re calculating a major donor’s capacity to give we look at their total visible assets and calculate that they will give 5% of that over five years to charity. Where does that ratio come from? The IRS, the Chronicle of Philanthropy and Giving USA are the three big resources for philanthropic giving information in the US.

Last year the Chronicle of Philanthropy published gorgeously interactive statistical maps using IRS data from 2008 (the most recent year available) showing the percentage of discretionary income that people who itemized gave to charity.

So it’s easy to see where the average of 5% we use comes from.

AND WHAT ABOUT THIS ‘OVER FIVE YEARS’ BUSINESS?

I have no idea why we still cling to the notion that gifts are given over five years. Back in the day, capital campaigns used to be seven years long. The first two years involved intense cultivation and solicitation of those closest to the organization (the ‘Silent Phase’) and then, during the final five years, the campaign was expanded to all donors.

These days, campaigns are more targeted and major donors want to give gifts on a shorter timetable, two to three years typically. World (and personal) finances change very quickly, and everyone needs to be more nimble. So why do we still say ‘over five’?

We’re operating on an antiquated system that doesn’t take into account current realities. Shouldn’t we be wondering: Are we low-balling our estimates and missing opportunities?  Is it time to reconsider the way we create our ratings so that they more accurately reflect the reality of the philanthropic world today?

Have you changed your rating system lately? Tell me more!

This post begins a series talking about major gifts ratings and how we derive them. Next week I’ll be weighing in on capacity ratings.